According to SaaS Mag, with increased adoption especially of Salesforce, Software as a Service industry is on a rise and is expected to be more than $130 billion industry by 2020. SaaS is referred to as a software distribution model in which a service provider hosts the application and makes it available for the customers over the internet. There are three main categories of cloud computing:

SaaS is similar to ASP (Application Service Provider) and on-demand computing software delivery models.  The SaaS model where the provider hosts the client’s software and delivers it over the internet to an approved set of users is like ASP. The on-demand software model of SaaS refers to when the provider gives clients network-based access to the software. The source code of the application is the same, and it is specifically created for SaaS distribution. When the new functionalities are to be rolled out, it is done for all users. Data storage again depends upon the type of agreement the provider has with the customers. Customers can opt for data storage locally, in the cloud, or both locally and in the cloud. Organizations can also integrate other software with SaaS applications using APIs.

There are certain advantages and disadvantages of SaaS applications:

With more than 80% of the applications being hosted in the cloud, organizations are confident that their operations no longer depend on legacy systems. The main beneficiaries, as expected, are small and medium businesses, which also have the best growth rates in 2018.

There are no potential disadvantages of using SaaS, but the organizations should strictly enforce the service level agreement (SLA) to mitigate any unwanted disruptions and security breach.

Almost all SaaS solutions are based on a multitenant architecture. This means that a single version of the application with a single configuration (OS, network, and hardware) is used for all customers (tenants). Horizontal scaling i.e. the application is installed on multiple machines to support scalability.  Also, in some cases, a second version of the application is set up to offer the pre-release of the software (beta version) to some of the selected customers for testing.
Now, this is in contrast with the traditional software where multiple copies are of the software, sometimes of different versions, potentially with a different configuration and most often than not customized are installed across the various customer sites. Each version is based on a unique code in this traditional model.
There are mainly two varieties of SaaS:

Previously, it was believed that horizontal SaaS is more sustainable as it is a more operation focused software. But SaaS developers have now understood that neither model is superior. In a highly competitive industry and in a bid to stand out, SaaS applications now enable the integration of third-party apps and existing business solutions. The solutions are now designed to meet needs across industries.

Nearly 73% of the organizations say that all their apps will SaaS-based by 2020. 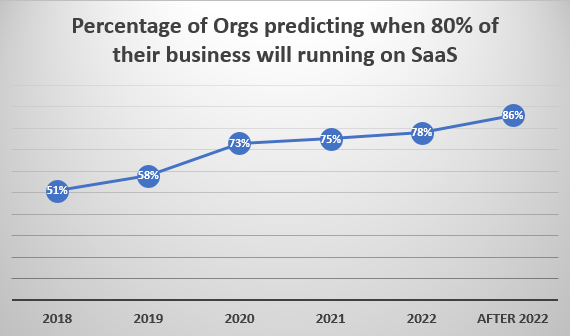 Intuit Data reveals that 85% of small business owners plan to invest more in SaaS solutions that by 2020, SaaS will be the most disruptive technology. On average, enterprises across industries use between 25 to 100 SaaS applications.
As the competition among the businesses is on the rise especially in the SaaS domain, customer expectations are also rapidly changing, and businesses need to adapt quickly, or they can be left behind in the race. Keyways in which SaaS could evolve in the coming years: